By now, you should be receiving the last of your 1099 forms from banks and brokerages for tax year 2009. Together with these 1099s and my W-2 form, I have all the data that I need to prepare my tax returns. But, I am now waiting for my CORRECTED 1099 forms arrive. For several years, I have had to re-figure my taxes due to updated numbers on my tax forms.

For investors, the usual suspects are mutual funds (especially foreign funds), Exchange Traded Funds (ETFs), tax-free bonds, and dividend paying stocks. The Internal Revenue Service (IRS) has added two relatively new boxes on the 1099-INT form that report tax exempt interest, and the amount of tax exempt interest that is subject to the Alternative Minimum Tax (AMT). For mutual funds, there are four categories of distributions: long-term capital gains, short-term capital gains, dividends, and non-qualified dividends. Mutual funds sometimes classify their distributions incorrectly and need to re-classify them properly. ETFs will sometimes declare a distribution in December, but not pay you until January. Unfortunately, you need to pay taxes on these funds in your prior year's taxes. Sometimes, foreign mutual funds need to calculate the foreign taxes paid by the fund. This calculation often takes a couple of months for the fund to figure out. Foreign taxes paid can be taken as a credit on your U.S. taxes. And, I've had instances where my brokerage put my tax-free interest in the wrong box, listing it as taxable interest. For dividend paying stocks, I've sometimes seen the dividends characterized incorrectly as non-qualified dividends when they were actually qualified dividends (which have preferential tax treatment).

The corrected 1099 forms are sometimes further corrected. In one case, I didn't get my last 1099 corrected until April! Most brokers inform their clients that corrected 1099 forms will be mailed by mid-February. I can sometimes predict when one of my 1099 forms is incorrect, and expect to receive a correction. Issues with 1099 forms usually resolve themselves, but it often takes the brokerages and banks a while. For people who are expecting a tax refund, deciding when to file can be a hard call. You want to get your refund back quickly, but you wouldn't want to have to file an amended tax return later...

See Also: When Will I Get My Refund?

Congratulation to Stephen Grimes, who is the winner of the H&R Block Giveaway Contest. He will be receiving a copy of H&R Block At Home Deluxe (formerly known as TaxCut) which includes tax preparation for both federal and state returns.

His tax tip was to harvest stock losses, saying "I did this a year ago near market bottom, and I will be deducting $3000 per year off my income tax for five years!!"

Here are some of the other tax tips I've received (as well as some of my own).

The contest is over now, but if you have any other good tax or money saving suggestions that you would like to share, I encourage you to leave a comment below.

If you missed out on the H&R Block At Home giveaway, I do have a couple $10 rebate coupons good through 4/15/10. The rebate is for $10 off of an H&R Block At Home Deluxe or higher purchase from these stores: Amazon.com, Best Buy, Target, Office Depot, Microcenter, Staples, and Fry's Electronics. If you are interested, Email me your mailing address (my Email is shown in the sidebar of my blog). I will cover the postage to send it to you, but this offer is limited to the first two responses that I get since I only have two coupons.

See Also: When Will I Get My Refund?

Welcome to the new PFStock.com. Apparently, I am not the first person to use this domain. I want to ask my readers for some help in asking "What was the old PFStock.com?" Below is a screen shot of the old PFStock.com taken from the Internet Archive (The Wayback Machine at archive.org). The screen shot is dated January 15, 2006, and appears to be written in simplified Chinese characters. 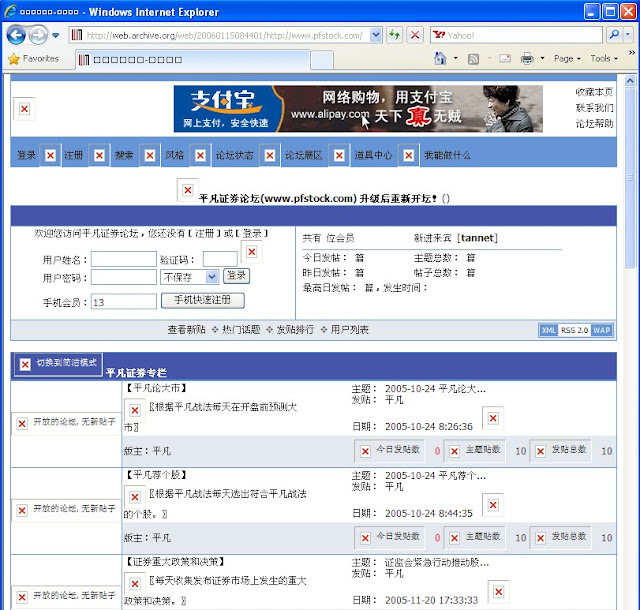 My best guess is that it is some sort of stock trading message board, but any insight that I can get would be appreciated. One thing that I noticed, though, is that I don't get much traffic based on the fact that this is an old (used) URL.

The deadline to enter the H&R Block Giveaway Contest is approaching. This contest will end on February 12, and the winner will be drawn from among the eligible entries. To recap, the folks at H&R Block have provided me a copy of H&R Block At Home Deluxe (retail value $45) to give away to one of my lucky blog readers. H&R Block At Home was formerly known as TaxCut.

This giveaway is for a new Deluxe (Tax Year 2009) version of H&R Block At Home which includes tax preparation for both Federal & State returns. That should be adequate for most people to complete their own taxes. Although the software includes free federal e-file, you may have to pay extra if you want to also efile a state return.

I am holding a random drawing for the tax software. Based on the current number of entries, your chances of winning are still pretty good. You can enter to win by posting a comment here.

As a reminder, you will need to send me an Email message letting me know that you posted a comment. Blogger does not retain your contact information, and anonymous comments are permitted.

Note: H&R Block At Home software was provided for review by  H&R Block. All opinions expressed are my own.
Posted by pfstock at 6:25 AM 0 comments

In an earlier post, I cautioned against putting too much weight into the usefulness of a rule of thumb. (See Wealth According to The Millionaire Next Door.) Let's build on my example, and take a single-income family (two people, no kids). Assume that one makes $75k/year, and they are both about 30 years old. So according to the formula in The Millionaire Next Door, if they have over $450,000, they are PAWs (prodigious accumulators of wealth). For argument sake, suppose that they do have $450,000 in net worth, which would put them squarely in the PAW category.

Now, suppose the other partner decides to start a business, and their combined income increases by $60k to $135k. By the formula, they ought to now have $810,000 in net worth in order to stay in the PAW club. Well, they now fall $360k short of the mark. This sounds crazy, but the math proves it. Using this backwards logic, one could conclude that any activity that increases the income of the couple is a bad decision because it would change them from being PAWs (rich) to just plain average. Does this nonsense make sense to anybody?

Let's look at another example using two "rules of thumb." The first rule of thumb is that in order to have enough accumulated wealth to retire, one needs to be able to replace 80% of their current income in retirement through savings, IRAs, 401(k)s, and the like. The second rule of thumb is that one can expect to earn 4% on their accumulated savings in retirement (This is a conservative estimate that assures you won't run out of money after you quit working). Now suppose that an individual in his 50s makes $90k per year. By the first formula, that person needs to be able to replace $72k per year in retirement. Using the second formula, the person has saved nearly $1,800,000. In the example, we assume a 4% interest rate: $1,800,000 X 4% = $72,000. So, he's all set!

That number, by the way, happens to be 20 times the amount of the raise. I can assure you that mathematically, a raise of any amount will require a 20X increase in savings based on these two "rules of thumb". So, the next time you are offered a raise, are you going to tell the boss, "No thanks, that will just push out my retirement date"? Of course not! Common sense alone tells you that you would be better off getting the raise, but a bunch of rules of thumb tell you that the raise will hurt you financially.

So, in summary, take a rule of thumb with a grain of salt.